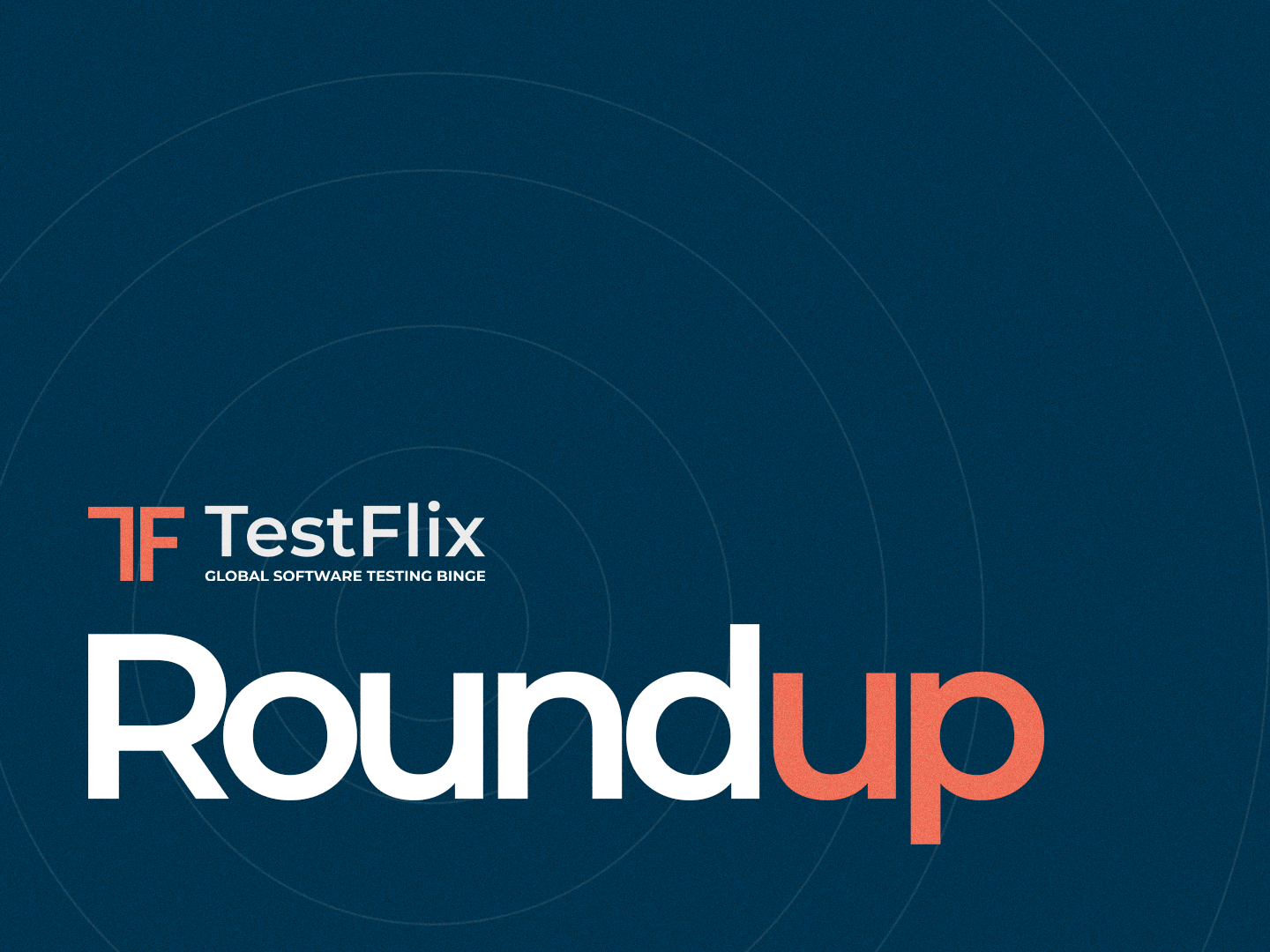 TestFlix’22 was the third edition of our flagship conference, TestFlix – The annual software testing binge. The love, support, and feedback from the global testing community for the last two editions have been nothing but surreal. While we take pride in the love and support from the community, we also take deep learnings from the feedback we received.

With the feedback on one side and the quest to deliver a better TestFlix experience on the other side, we chose to tweak the format of TestFlix a little bit this time. The number of speakers was reduced from 100+ to 60+ while the length of the talks was increased from a maximum of 8 minutes to a maximum of 15 minutes.

With renewed energy, and an endeavor to deliver better and a new format, we launched TestFlix CFP. With over 60+ entries submitted, around 25 made it to the final conference, which is nearly 40% of the overall speaker lineup.

In terms of registrations, we kept a target of 10000+ registrations this time, roughly 40% more than what we had achieved in the previous year. This is not just an empirical target for us but had a larger significance in terms of the reach we wanted to achieve this year.

GSPANN was the first sponsor who showed support for TestFlix as a Gold sponsor. We would also like to thank BrowserStack who was the premier sponsor for TestFlix and is our annual sponsor as well for all the community events.

When we as a team decided that we would be targeting 10,000 Registrations for TestFlix 2022, we all had our doubts and lots of uncertainty. Still, one thing that the entire team was aware of was that this feat will require a lot of hard work and all of us were ready to put that in just because we believed in the vision and the rationale behind 10K registrations.

Over time, a lot of other sponsors like ACCELQ, LambdaTest, and Opkey showed their support for TestFlix in different sponsorship tiers.

The initial steps included a lot of brainstorming sessions and also conducting our first ever ‘Evolve’ (Our offsite program) where we as a team brainstormed a lot of ideas and decided the path that we’ll have to follow to reach our goal. 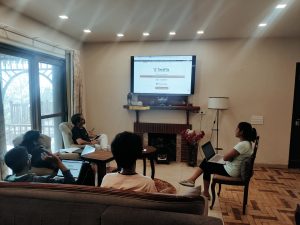 On 29th September, exactly 1 week before TestFlix, we got our 10,000 registrations while all of us were over the moon, we were aware that the work is not yet completed because our goal was not just getting the registrations but was to provide value to our community members and make TestFlix 2022 something from which they can benefit a lot.

One interesting thing which happened in this year’s TestFlix was a lot of Indian Startups and Unicorns showing their support for TestFlix to Satisfy their hiring needs. We are thankful to PhonePe, Yubi, and Fasal for their support here.

Fast forward to the 1st Day of TestFlix 2022(8th October), we got over 12000 registrations from 119 countries and 4000+ companies and this made TestFlix 2022 the biggest virtual testing conference ever. The conference included 61 atomic talks and was categorized into 14 themes and covered topics like Web3.0, Leadership & Management, Automation, AI/Ml, DevOps, and much more.

The first day of TestFlix (8th October) began at 2 PM IST and the event was hosted by Paras Pundir. The first talk of the day was given by Dr. Andrew Brown who presented on the topic ‘Why adding more processes may not improve quality – The Peltzman Effect‘ where he demonstrated how the Peltzman Effect applies in software development and how people can raise the bar on quality in an organization by changing the relative weight of the goal of the project rather than by adding more quality phases.

The day continued with speakers presenting on a lot of trending topics which were received well by the audience. We had Geetima Dutta who presented on the topic ‘5 Challenges I faced as a new QA Lead‘ and she also demonstrated how people can handle these challenges as a new QA Lead and how to handle the team better. We also had Raj Subrameyer who presented on the topic ‘4 Leadership Traits that will make anyone an effective leader‘ and how people can apply these traits in their day-to-day jobs.

Day 1 had a fitting end with Alan Page presenting on the topic ‘The Tester I Was and the Tester I Could Be‘ where he discussed his development both within and outside of the testing world, and also talked about the kind of Tester he would like to see emerge from the software industry. 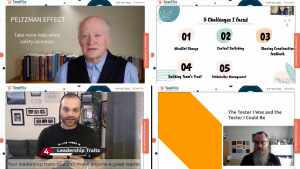 The second day of TestFlix (9th October) began at the same time and the first talk of the day was given by George Ukkuru who presented on the topic ‘How Usage Analytics Can Improve End User Experience‘ where he emphasized the importance of gathering usage analytics, how to generate insights from usage analytics, and what are its benefits.

The day continued with Sahil Puri presenting on a unique but interesting topic ‘The Multiverse Of Testing – Beyond the Known Universe‘ where he shared why Testing is more than just raising bugs and ensuring quality as well as how people can break down barriers and explore all options to make a difference in this crucial and constantly changing role of quality engineering.

We are also grateful to TestGuild, Virtuoso, and Virtualan for their support for TestFlix as sponsors in various tiers. 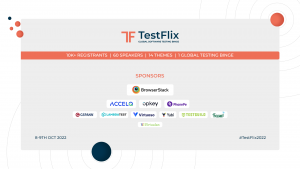 Then we moved on to two power-packed talks back-to-back, the first one by Anuj Magazine who presented on the topic ‘How to write so that others read‘ where he did a teardown of great writing components, certain pitfalls that people need to avoid when writing, and some really important tactics to level up your writing game. The second one, by Ajay Balamurugadas who presented on the topic ‘Become the CEO of your testing‘ where he talked about how to increase the scope of testing, how people can add value irrespective of their designations, and how individuals can make themselves valuable in any team. 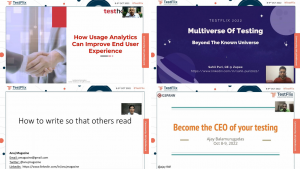 Day 2 of TestFlix 2022 came to an end with the last talk of the day which was presented by Robert Sabourin on the topic ‘Risks with Ticket Driven Software Testing‘ where he shared his findings and also discussed the possible consequences of ticket-driven software testing. After the last talk, our host for the event – Paras Pundir conducted a short Q&A session about TestFlix 2022 with all the attendees and the entire team at The Test Tribe thanked the audience for attending the event and making it a huge success. 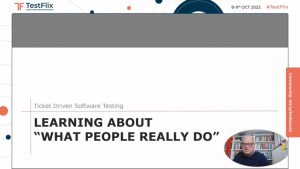 TestFlix 2022 had some really exciting contests which are as follows:

Two of our upcoming major events were also revealed during the TestFlix 2022 conference. The first, TestAway 3.0 Residence Learning Program for Testers will be held from 1st December to 4th December 2022. Second, Worqference, a combination of conferences and workshops, which will take place on February 24–26, 2023.

While TestFlix 2022 was a huge success, here are some numbers that prove the same. 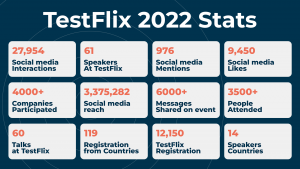 And with this, the 3rd edition of TestFlix came to an end. We want to take this opportunity to thank all our community members, it is because of you that the conference was a huge success. We would also like to extend our heartfelt thanks to all the sponsors, speakers, and volunteers of the event for their contributions and support. Without their help, we would have not been able to make this event happen.

We hope that you had a great time at TestFlix 2022 and we hope to see you again soon!