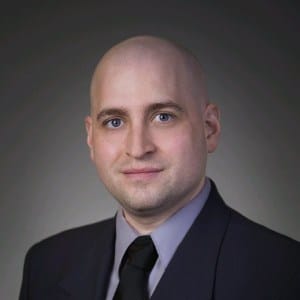 Robotic Process Automation (RPA) is a term given to technology that allows developers to programmatically emulate the actions of a human to execute a business process. RPA often operates on the user interface (UI) layer to capture data or interact with an application or across multiple applications to perform tasks that are considered repetitive or time-consuming. Originally focused on business processes, many RPA solutions now integrate with SDLC tools. While the promises of easy adoption and scaling are made by almost every vendor, the reality is long-term commitment to an RPA program is the same as any new application. In this presentation, the audience will learn about the benefits of RPA, multiple RPA use cases, and how RPA can be assimilated into a enterprise.

Thomas is a dedicated scientist and software developer with an educational background in (bio)physics. Most recent experience as Manager of Validation & Delivery at DBI after extensive work as a research scientist at three major research universities.

He previously worked as a Senior Application Architect and manager of enterprise automation at Huntington National Bank. He was responsible for the conversion from manual testing to Ruby/Cucumber automation for the enterprise. Originally accountable for the development and maintenance of automation frameworks for Digital Channels, he eventually led the automation effort for 73 applications across Huntington that encompass testing, metrics & reporting, data, and environment.

At Nationwide Financial, worked in an Agile environment in alternating roles as an Automation Tester / Requirements Analyst / Application Developer. Web automation testing via Ruby/Cucumber, defect tracking via Quality Center, and project management via RTC/RRC. Led both the weekly Book Club and Automation Stand-up in iMedia.

Previously worked as a Research Fellow courtesy of the American Heart Association. Prior research focus is the role of water in controlling protein structure, dynamics, and function utilizing femtosecond-resolved fluorescence upconversion. Additional work as graduate teaching assistant for physics laboratories, biology laboratories and biophysics courses. Laboratory experience in experimental physics and biophysics, which include the preparation of lab protocols, research presentations, grant writing, and manuscript preparation.