Home > Blog > Cignithon’21 – A QA hackathon like never before

It was time for the second edition of Cignithon – The Second edition of QA Hackathon organized by Cigniti & TTT and like everything else, this too was moved to a virtual setting. The first edition which happened in person saw high energy levels from everyone, participants, organisers, sponsors everyone.

All of us were albeit uncertain about how a virtual hackathon would go, but we were all taken for surprises. What happened, how it happened, all of this will be talked about in this blog post.

So just hold your horses and get ready to read an experience unlike never before.

and,  Tons of Belongingness and Camaraderie.

Let’s walk the journey together

The resounding success of Cignithon, 1st Edition, made sure that the initial reception to the second edition was good. As soon as we made the event live and started to spread the word about it, registrations started and went on consistently.

While we estimated, about 200 registrations would be good, we ended up doing 350 before we stopped taking any more. Such was the craze of the event that we started getting calls to open it for some more time, relenting to the pressure we opened for 20 more minutes and within those 20 minutes, we saw 50 more registrations. That’s 5 registrations every 2 minutes. Doesn’t that speak volumes about the popularity of the event!!

The event day of QA Hackathon

How often do you see 300+ professionals turning up for an online event on a Saturday morning at 9:30 AM? Especially when the latest Money Heist season was just released and Friday nights are meant for Binging.

It was showtime now for our high on energy host, Paras (@TheCommunityGuy). He started with an innovative game to guess the sounds he would play. While a normal event will have sounds of Musical Instruments etc, this one has sounds of Ringtones, Water Flushing, Pan Frying, etc.

After Subhendu, it was Mahesh Chikane’s turn. Mahesh is the founder of Test Tribe and a passionate tester himself. Having made several dents in the testing universe, the hackathon was one of the jewels in the crown. He explained the rules of the hackathon, 3 products, no time limit per product, how to submit bugs etc. He concluded by saying, “To my knowledge, this might be the biggest QA Hackathon the world has ever seen”.

Now was the time for which all the participants were waiting. It was time to reveals the products which these 300+ super enthusiastic QA Professionals were gearing up to test

The first app which was under test was Cometa.rocks – a 100% open source, using no-code,  automation testing tool for visual and functional regression testing on Prem or on cloud. The founder Ralf (//Insert LinkedIn) gave a heads up about the product and some dos and don’ts.

The second app which was to go under the lens of these amazing bunch of testers was Unifarm.co. Since this product’s domain was not so common, CEO, Mohit Madaan was patient to explain the product and other details very well.

They say, save the best for the last. While we don’t compare the products, the success and popularity of this product speaks for itself. The third and final product under test was Myntra. An app that needs no introduction, welcomed only WoWs from the participants.

With this, the HACK Began!!

This message from Ralf from Cometa.rocks summed up how the participants began this hackathon

The very first hour saw about 200+ bugs being submitted even when Cometa.rocks was down for most of the time due to the sheer load it had to bear.

Every hour, we saw 100+ bugs being submitted by teams across apps eventually taking this to 2000+ bugs.

After 36 hours, spread over 2 days, with the TTT team supporting 24*7, buzzing Cignithon related discord channels, the testing got over at 5:10 PM (IST) (This time as well, we had to relent to the enthusiasm of our participants and extend this by 10 more minutes).

It was time for the product owners to do the toughest task. Read 100s of bugs and come out with the top 3. It looks easy, we are certain, it surely wasn’t as easy.

This message from Ralf (again) is a testimony of the effort and energy of the participants. This is more valuable than any prize for the testers

Listen to what Ralf (Founder, Cometa.rocks) has to say about his experience at Cignithon

The winners were decided. It was time for Paras to be back again and do his magic in the closing ceremony.

Paras began by asking for feedback from participants. One of the participants, Manjunath, rightly summed this up, “I have been a part of a lot of developer hackathons, but this was the first QA Hackathon, I participated in. I felt, I belonged here”

This was followed by a Thank you address from Raghuram Krovvidy – President and Head (Global Delivery) at Cigniti. Some excerpts from his address are in this tweetstorm 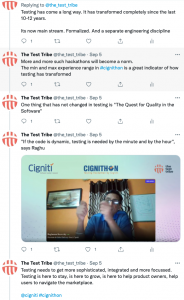 .And now the moment, everyone is waiting for. It was time to announce the Winners.

2nd Runners up: Team Out of the Box (Sheetal Tamta Kohli)

Saket Agrawal from the Team Avengers (Winners of Unifarm) shared his thoughts here.

With this, the event ended on a high. But it’s just this event that ended. The test tribe along with Cigniti will be back with more such events and we promise, the wait will not be this long this time. In the meantime, read this blog on cracking your next hackathon

Oh! By the way, did you register for TestFlix-2021 – The Annual Global Software Testing Binge